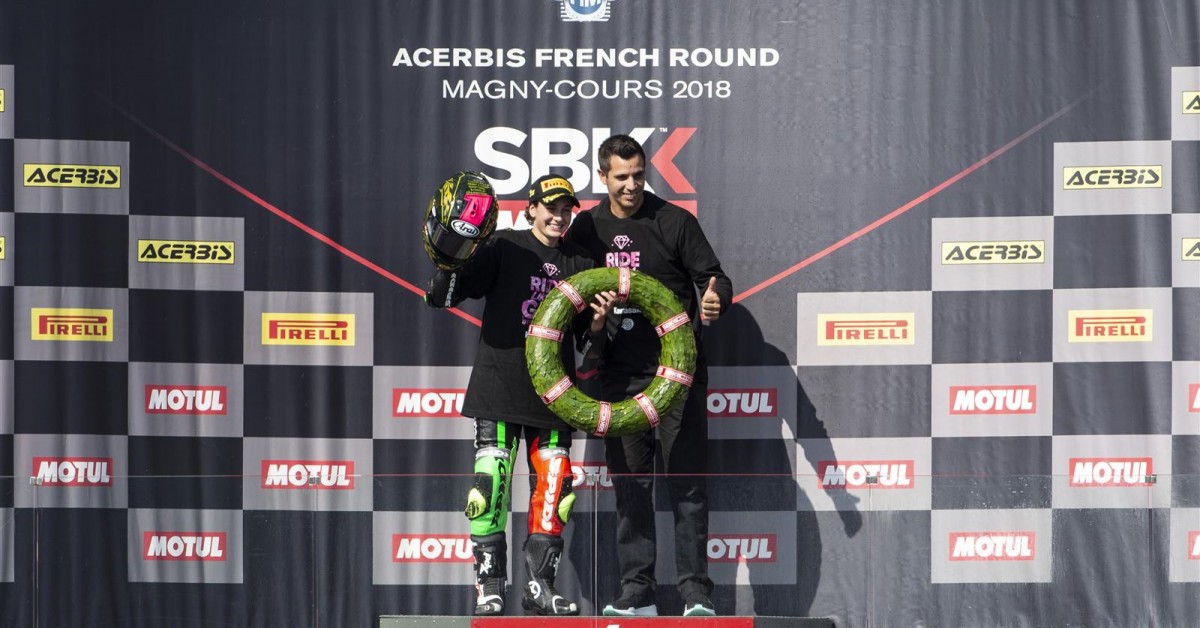 Starting in a lowly 25th position on the grid Carrasco was involved in a fight for 20th place for much of the race but she made progress to 19th spot. In the closing laps she moved to a 13th place that would be enough to give her a one-point lead over Mika Perez (Kawasaki ParkinGO Team) in the final points table.

Perez was in a position to win the championship himself on the last sector of the final lap but his race leading position was taken from him with two corners to go, and his 20 points were not quite enough to give him the crown.

Carrasco was unaware that she had won the championship on her slowdown lap almost until her team stopped her for a trackside celebration, with her championship-winning T-shirt having the phrase ‘Ride Like A Girl” emblazoned on the front. In her post-race interview Carrasco dedicated her championship win to the late Moto2 rider Luis Salom, who was a friend of Ana’s and the cousin of David Salom, her team manager.

In another astonishingly close and battling WorldSSP300 race, Scott Deroue (Motoport Kawasaki) was also in contention for both the race and title wins until he was forced out with a technical issue.

Perez and Deroue battled it out for the championship up front but when Deroue suddenly slowed with problems changing gear, Perez was in the lead. He was then the driving seat for the championship itself until Daniel Valle ambushed him in the final two turns. Perez lost out on the title by just 0.168 seconds, in a race that was so close that Carrasco, in 13th place, was only 2.468 seconds behind the race winner.

Kawasaki wrapped up the championship at the previous round, and finally ended up with a 61-point advantage at the end of the eight round championship.

Ana Carrasco, stated: “It is unbelievable to win the championship and we worked so hard to be here. I did not know I had won on the slowdown lap. I tried to see some TVs to check but I did not see any. I only realised when I got to turn five and I asked the spectators if I was first. I can only say thank you to a David Salom and all the Kawasaki DS Junior Team, it is for all of them. I also want to say thank you to my family who have done so much for me. I want to dedicate this title to Luis Salom. The day we lost him I promised to dedicate my first title to him. At the moment I am happy because we have achieved our goals, but I do not realise all of the things about being the first woman in history. I think after a few days I will be more conscious of this.”

Mika Perez, stated: “I gave my maximum today. I knew it was win or crash, and finally I got second. I tried everything and the team did a great job. We were very close to the win but we have to congratulate Ana and the race winner Dani because they did an incredible job.”

Scott Deroue, stated: “We had a really good weekend until now and I think we were one of the fastest. Every session we were in the top positions so I was feeling really good. I felt the same in the race and I was in the top three all the time. Then with seven laps to go my gear lever broke and it was over. We had good speed this season and were really consistent but in Misano we had a problem and today we were supposed to finish on the podium again, and then this happens.”